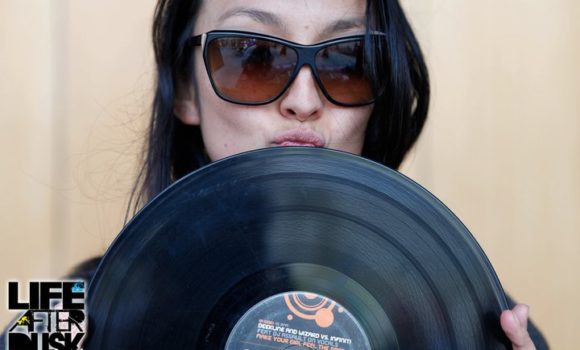 Eva’s east coast roots have helped develop her taste in dark, dirty and raw party beats favoring miami bass, breakbeats, electro bass and everything in between. Her stylized selections have brought her to audiences around the nation, sharing the stage with such notable international artists including The Crystal Method, Stanton Warriors, Reid Speed, DJ Icey, Deekline & Wizard, Freestylers, General Midi, Krafty Kuts & Uberzone; as well as Miami based legends and personal heroes Dynamix II, Jackal & Hyde, Hydraulix, Supernaut, Merlyn, and many more. In addition to a rigorous solo DJ schedule Eva’s ongoing creative collaborative efforts have included extensive work with an all female roster of divas: JULZ MC has been a frequent partner in crime as well as dj crews, Bitches on the Switches & White On Rice, Divas. Her most successful pairing has been with west coast electro bass pioneer Athena, together known as Kimchee Love. For ten straight years you could catch her without fail at her monthly Hollywood breakbeat throwdown BROKE AS F**K (formerly BROKE on Sundays), steadily keeping the breakbeat vibe alive in Los Angeles beginning in 2007, and until an extended hiatus pressed pause in 2017. Things are ramping up once again in SoCal for the breakbeat movement, with EVA planted firmly in the center. In the meantime, look for her as she continues to rinse out sweaty crowds (in living rooms) across the nation.